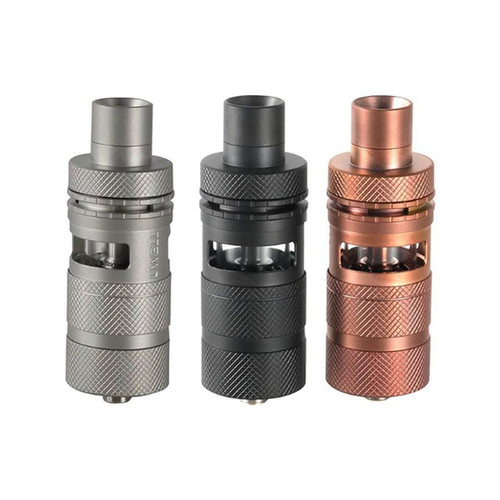 The Uwell D2 RTA features a two-post design, double-glass top airflow system, threaded top-fill for the 4mL tank reservoir with anti-leaking structure. The 24.7mm chassis design is grounded in-line with Uwell's manufacturing principles, maintaining premium aesthetics, installation of tried-and-true atomizer core, and innovating upon certain elements on the tank, such as the airflow system. Measuring 24.7mm in diameter, the D2 RTA implements a truly industrialized showcase piece, durably constructed with attention-to-details and finish with a stunning matte finish. Built to meet the demands of a modern day performance, the Uwell D2 deploys a two-post, dual terminal build deck, with each terminal measuring 2mm in diameter to accommodate a wide range of build configurations. Two internal airholes feeds into the chamber, measuring 5mm by 3mm for ample direct-to-coil airflow. The Uwell D2 RTA integrates a unique air delivery system of its kind, implementing double-glass top airflow with three adjustable airslots. The airflow enters through the hidden airslots located at the top cap, which are then funneled down through the two glass tubes to create an effective passage to the atomizer base, resulting in effective vapor production and flavor recreation. Designed with precise execution and engineering marvel, the Uwell D2 RTA is an unrivaled well-rounded performance platform.